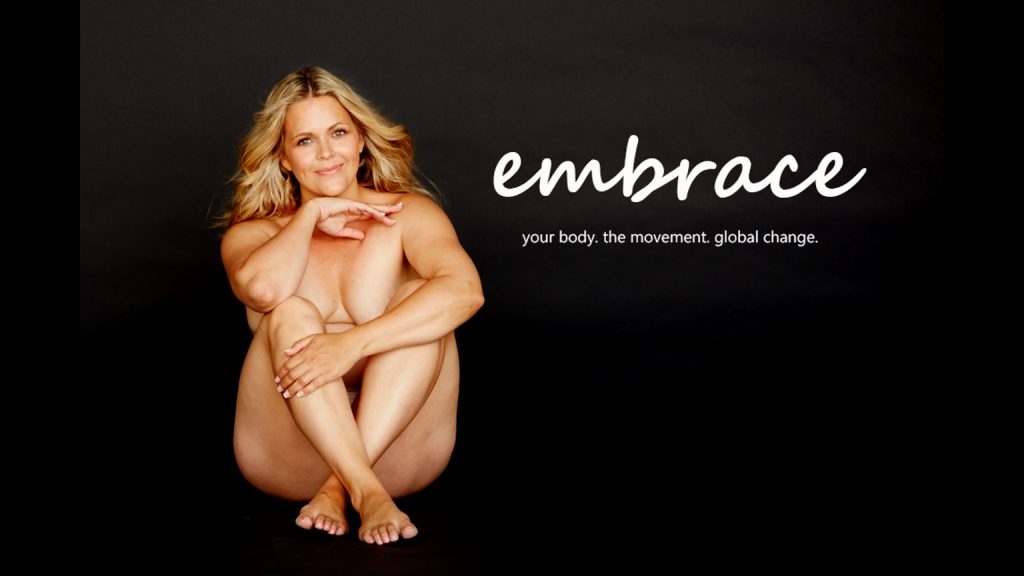 This week Florence and I saw the film Embrace, made by photographer Taryn Brumfitt (see photo above) and the Body Image Movement. In it she described her hate-relationship with her body, particularly after she birthed three babies in a relatively short time. Having shared a couple of photographs of herself on social media, she decided to further explore the subject of body image in a documentary, after the images went viral. The response was incredible – many people congratulating her for her courage, many sharing personal stories of pain, despair and self-loathing, and some “trolls” giving her unwarranted and deeply unpleasant feedback. During the film I nearly cheered out loud when, having had her breasts criticized, prodded and poked by a Hollywood plastic surgeon, Taryn decided that her boobs should actually be given a Hollywood star of fame, for providing over 4000 meals (you don’t want to google “Taryn’s boobs!) She met some inspiring people along the way, including Jade Beall, whose work we have long admired, a photographer who relishes and celebrates real women’s bodies. Jade’s images of mothers and breastfeeding are stunning and


make me want to strip my clothes off and run straight to her studio!!!! Let’s be showing women these photographs, not the unattainable, photoshopped images in the magazines in which the celebrities don’t even recognize themselves!

I hope that new mums aren’t in a hurry to reclaim their pre-pregnancy bodies.  Some of you will remember the spotlight shone on Princess Catherine after the birth of her babies.  To focus on Kate being back in shape just a day after giving birth was shameful.  I was delighted that Kate didn’t hide her post-pregnancy bump when she emerged from the Lindo, though many people were very surprised that it existed!  Our media is so swamped with stories and photos of celebrities back in their Size 6 jeans and wearing their Jimmy Choos on a night out just a couple of weeks after the birth that we have totally lost any sense of perspective – of course a woman who isn’t wearing several layers of Spanx or similar supportive garments is going to have a lovely soft pot-belly for a while.  Given that I had an emergency caesarean mine took quite some time to settle and it did feel like a strange unknown.  What I didn’t know at the time, but am just blown away by now, is that my body had put down specific fat stores for breastfeeding that would only be burnt effectively by feeding, not by exercise.  Amazing!   I have to admit that nobody warned me that my body wouldn’t pop back after birth, but it makes utter sense that if your body spent nine months growing a human being, that it is probably going to take at least that amount of time to return to a vaguely familiar form and perhaps that shouldn’t be our main focus – maybe we should devote our attention and time to our newborn and give ourselves a bit of a break where perfect bodies are concerned.  Walking and fresh air is great for the postnatal Mum, once the initial couple of weeks or more have passed, for endorphin and oxytocin production particularly, but do we really need to do more than that?
The splendid anthropologist Sheila Kitzinger coined a phrase “babymoon” to mean a time immediately after birth when the parents hunker down and spend time getting to know their baby.  In fact, it is believed that fathers find the transition to fatherhood far easier if they do spend two weeks minimum at home after the birth.  In many cultures, the birth mother has always been encouraged to spend 40 days and nights at home with her baby, handing over all responsibility for the home, work, other children etc to the rest of the family/community.  And a doula would, no doubt, have been one of the experienced women of the village – a woman who could come and sit with the mother, answer the questions, support the feeding and offer practical and emotional support.  It saddens me that we have moved away from this so much.  I see far too many women who are isolated, unsupported (once their partner returns to work), struggling to do too much in the belief that they should be able to do it all.  They are exhausted, which is understandable given that they are doing the most important and most challenging job of their lifetime (caring for a newborn) whilst sleep deprived.  We need to nurture and support our postnatal women.  We have much higher rates of postnatal depression than in those communities where the “lying in” period is encouraged.  One of my great go-to doctors for all things pregnancy, birth and postnatal, Sarah Buckley, recommends that no new mother should get out of her pyjamas in the first couple of weeks after birth, because if she is dressed she will feel like doing too much!  And, I whole-heartedly agree with this sentiment.  One mother I supported to breastfeed her second baby described how, with her first, she had given birth and come home one day and done the weekly shop in Sainsbury’s the next.  It was not entirely surprising that the breastfeeding relationship had been a difficult one.  I hope new parents will close the doors, shut away the visitors and enjoy as much skin to skin contact with their new baby as possible, sleeping when he sleeps, being fed nourishing meals provided for them by loving family or their doula and allowing time to do its healing after the pregnancy and birth. Surely time spent fixating on getting our “perfect” bodies back is time lost from enjoying our new babies?
So, if you can, get yourself to a screening of Embrace, or explore the Body Image Movement – it’s time to turn things around!